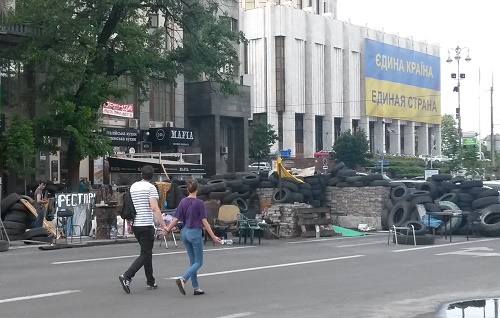 Coming from Stockholm to Kiev for the first time since the end of November last year, you don’t know where to begin. Back then it was all about the Ukrainian government signing on the dotted line of the Association Agreement with the European Union. Now, following the shocking scenes of Maidan and the shoot to kill policy by the government on protesters, you’re struck numb by the wreckage of the aftermath. The many pictures of the dead up along Institutskaya Street, scene of the worst fighting during the months long protests is a stark reminder of the outright brutality of the struggle and how fragile the current situation is.

It’s Friday before Election Day on 25 May, and there’s an uneasy sense of calm in Kiev. There are few election posters around the capital, according to reports from the west in Lviv, there are apparently none at all. The majority of people seem already to have decided on the favourite, Petro Poroshenko with a prognosis of a 60% possibility for a second round run-off. Meanwhile the Maidan People’s Union remains on the streets where it was formed, with mainly men in military fatigues ambling around or sitting outside their makeshift tents. According to one of them, they’re waiting to see if the elections will be fair and the new government will not be Yanukovych.

The same cannot be said of the east where the situation remains volatile, despite the de-escalation in hostilities over the last week. The news from Donetsk is that the polling booths are going underground, having been raided by masked separatists, destroying ballot papers and boxes and threatening electoral staff. Yet, the situation remains, as always in Ukraine these days, very fluid. Information is at a premium on the movements of Ukrainian forces and the separatists, with the government keen to push ahead with its military plans prior to the elections. The recent outspoken comments by Ukraine’s richest oligarch, Rinat Akhmetov against the separatists, and in staunch support of the Kiev authorities, may have swung the pendulum in the east. Increasingly, there are stories of malcontent with the separatists amongst ordinary citizens, who perceive them to be made of criminal elements.

Even without the current instability in the east, the challenges are numerous for the incoming government. Where to now for Ukraine? The economic situation is acute – lessened somewhat by the recent $17 billion loan from the IMF, addressing the issue of decentralisation and allowing local governments a greater say in their own decision-making processes, and not least, convincing the electorate that the authorities will work for the people and not for their own vested interests. Ukraine has had opportunities of implementing reform before, cue the Orange Revolution and the elections of 2010, only to be scuppered by political in-fighting and cronyism.

This Sunday is as fresh a slate as any to rebuild from, although the thorny issue of holding elections in a country riven by divisions, and under the shadow of a belligerent unpredictable neighbour, would test the resolve of any fledgling administration.

Meanwhile, Maidan remains and its protesters wait. There are 1000 election observers in the country to ensure that the elections are free and fair. With such safeguards on the ground, the process should be reasonably transparent. But the incoming government will need to lay down an early marker of its intentions to bring real change to a country whose citizens have hankered for far too long for a government that represents their interests. May it happen on Sunday.

I’m working as project manager at the Rule of Law Programme at FBA. For several years I worked at policy level and as an NGO advisor in civil society-related issues in post-conflict, transition and crisis settings. I’ve also worked as a lecturer in development and humanitarian studies at Uppsala University.

A Farewell to Arms

The first question that most probably comes to mind is, why this title? I just happened to be reading Ernest Hemingway’s Farewell to Arms at the same time that I am packing my bags to leave FBA after three years (six, if I count working as a consultant for FBA’s prolific and innovative Rule of […]

The Sustainable Development Goals and the Rule of Law – Confirming the Inevitable?

September 2015 was a big month in terms of reshaping the development discourse and sharpening the focus of the much maligned Millennium Development Goals (MDGs). And not a moment too soon. What we got were 17 Sustainable Development Goals (SDGs) that are intended to pave the way for more measurable outcomes that are grounded in […]

Rule of Law in Liberia – even the smaller picture counts

In any society, the provision of legal safeguards in administrative processes is a cornerstone of strengthening greater adherence to the rule of law as well as building up a sense of civic trust between the government and the governed. This all sounds very high-minded and pretty abstract to the ordinary person on the street, […]