When keeping the peace means keeping your distance 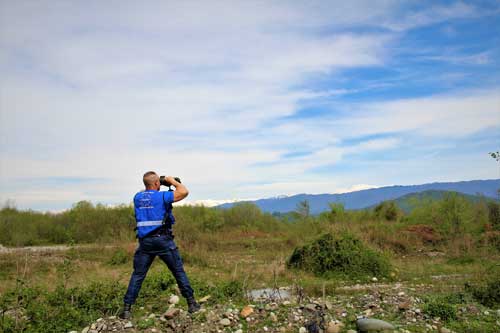 Summertime in Tbilisi has arrived, carried in on the back of dramatic thunderstorms sweeping in from the Black Sea, pouring down enough rain to transform the steep streets of the old town into short-lived rivers, and leaving daily temperatures slightly higher after every visit. Soon even such weather-driven drama will dissipate however, settling into a steady 35 degree heat during July and August, predictable enough to allow for the planning of cooling hikes in the Caucasus mountains and refreshing trips home to Sweden where the summer temperatures are likely to be much cooler.

As with the turning of the seasons, the work of the EU Monitoring Mission in Georgia (EUMM) also follows a certain reliable pattern. Ground patrols (now numbering in the tens of thousands since the mission was deployed almost 10 years ago) leave every day from field offices around the country to monitor the unresolved conflict between Russia and Georgia along the administrative boundary lines (ABLs) between the breakaway regions of Abkhazia and South Ossetia and the areas administered by the Georgian government in Tbilisi. The positions and practices of security actors are monitored, the effect of the conflict on populations living along the ABL is documented, and the adherence of the two sides to keeping their military assets away from the ’security zone’ near the breakaways is closely followed, both by monitors in the field and experts in the headquarters, including 19 Swedes sent by FBA and other Swedish agencies. Through regular incident prevention and response mechanism meetings covering both Abkhazia and South Ossetia, the mission then uses its monitoring findings to contribute to the resolution of technical issues that could escalate into political argument (and indeed often do.) Finally, through its participation in the Geneva international discussions the mission brings its findings to the international venue where a final resolution to the conflict remains under discussion on a quarterly basis. While the circumstances and timing of each event may vary, this is the steady pattern of the monitoring/peacekeeping mission: keep your eyes open, gather information on what you see, analyse it over time, make sure its accurate, and feed it into discussions focused on stability and conflict resolution.

As with any unresolved conflict, there is always the potential for a rise and fall in tensions, and for small incidents to lead to big arguments. Indeed such escalations are not always unintentional since technical issues are easily politicised and manipulated. Such events can become major concerns out of nowhere, such as in the case of Archil Tatunashvili, a Georgian citizen who was detained by Russian and South Ossetian border guards in South Ossetia in March and died while in custody. While the circumstances of his death remain a matter of intense debate, the event suddenly raised the tensions markedly, with heated rhetoric and accusations threatening to escalate the already tense setting of the ABL. It is in such moments, when an already fragile peace can easily escalate beyond the ability of political leaders to control it, that the mission’s role becomes critical, simply by keeping between the conflict parties, distant enough from both of them to be trusted by both to facilitate communication and provide predictability.

If the role of the EUMM sounds easy to maintain, in reality it is often a great challenge, especially after almost 10 years in Georgia. A monitoring mission with international expertise sees a lot, and in many ways has more contact with (and insight into) the consequences of the conflict than many other actors, whether the difficulties faced by the population displaced by war, the challenges to free movement, trade, and contact between communities posed by an increasingly ’hard’ border between disputed territories, and of the security challenges faced by the region as a whole. However, in contrast to other EU and internationally-led missions, we are not sent here to ‘help’, by providing training, advice, or long-term assistance. Indeed the only way we can help here is to stay within the mission mandate to stabilise and normalise the situation, build confidence on both sides, and inform EU policy.

For many of us who have worked as advisers to governments in post-conflict settings, or providing trainings, advice, or capacity building, it feels counterintuitive to learn deeply about the drivers of a conflict while also standing apart from it. But after the initial urge to do more reaches a peak, the realisation sets in that peacekeeping and crisis management is sometimes only possible if your involvement with the actors involved is limited. Impartiality and legitimacy are words that cannot be ignored in fragile and vulnerable conflict settings. With no end in sight for the current stalemate in the Caucasus, EU monitors here in Georgia will continue to keep the temperature of the conflict as low as possible. As for the weather, the only strategy is sunscreen and plenty of water.

Andreas Berg has worked for FBA in several capacities since 2010, including as Political Adviser, Security Sector Reform Advisor, Strategic Planner, and Coordination & Cooperation Officer, in locations including Kosovo, Georgia, Brussels, and Ukraine. From 2022 he is working as Security Sector Reform Specialist for FBA, based in Stockholm and focusing on the Western Balkans.

There and back again – the unexpected journeys of year COVID

What is the last ‘normal’ thing you remember doing? In the extreme year of 2020, many of us have asked this question, trying to remember the last event or activity where we blissfully, innocently, spent time in public spaces without caution, moving through crowds, kissing cheeks, and sharing food in a way that now feels […]

‘May you live in interesting times – in Ukraine’

Almost six months ago I wrote about the prospects for reform in Ukraine following the decisive election of a new president and parliament, driven by the desire of the voting public for major reform and stabilization of a country still involved in an ongoing conflict. Since then, the new government has frequently been tested by […]