The view from Tbilisi 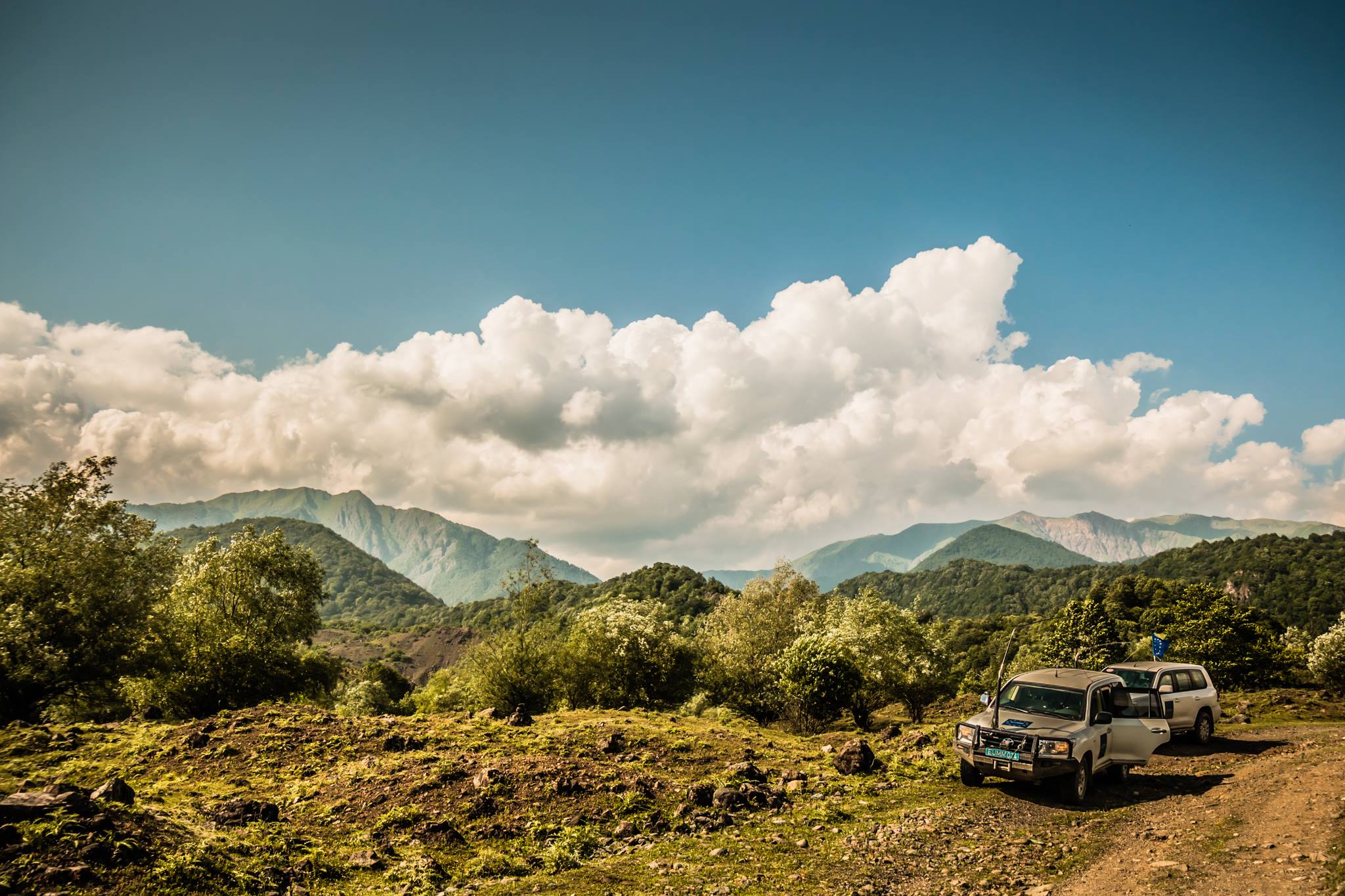 Summertime in Tbilisi, and the temperature seems to permanently hover at 35 degrees. Among the crumbling mansions of the old city, maturing grapes can be plucked directly from the vines spanning the narrow streets, shaded courtyards and stone churches provide a cooling escape from the sun, and basement restaurants advertise tempting Georgian dishes heavy with dumplings, cheese, and barbeque shashlik. In the forested headquarters compound of the EU Monitoring Mission in Georgia (EUMM) the sound of insects is deafening and staff are warned of the presence of poisonous vipers in the underbrush… a very effective motivation to keep off the grass.

As surely as the snakes hiding near my office, nearby dangers continue to cause apprehension in this corner of the world. The south Caucasus region, composed of the small countries of Georgia, Armenia and Azerbaijan, has always found itself vulnerable to the interests of its larger neighbours; sandwiched between regional heavyweights Russia, Turkey, and Iran. This is no less true since the three south Caucasus states achieved independence from the Soviet Union some 25 years ago. Each of them fell directly from Soviet domination into civil and ethnically-motivated wars, as nationalist and separatist ambitions filled the vacuum of Moscow’s control. The Georgian Civil war in 1991-1993, the Nagorno-Karabakh conflict in 1994 between Armenia and Azerbaijan (still unresolved today), and the conflict between Russia and Georgia over the breakaway provinces of Abkhazia and South Ossetia in 2008, have left their mark on this region. As with many ‘frozen’ conflicts in Ukraine, Moldova, the West Balkans and elsewhere, arguments over ‘occupied territories’ vs ‘sovereign republics’, and internationally recognized borders contradicted on the ground by fences, ditches, and patrolling Russian border guards, provide an uneasy foundation for peace and stability to grow.

The fragility of the region also serves to explain why the European Union Common Security Defence Policy (CSDP) deployed a monitoring mission to Georgia in 2008, and why over 20 FBA staff serve here today. EUMM arrived after the August 2008 Russia-Georgia war, with a mandate to monitor the Six-Point Agreement that halted the fighting in 2008 and provide badly needed stability with its presence. For almost 10 years the mission has patrolled along the Administrative Boundary Line (ABL) between Georgia and its breakaway provinces, providing information directly to international capitals and negotiators in Geneva seeking to broker a long-term peace agreement (so far unsuccessfully). Mission tasks include observing activities along the ABL, monitoring the adherence of all sides to the Six-Point Agreement, restoring confidence between the opposing parties at the local level, and reporting on the human security effects of the current stalemate on conflict-affected populations and internally displaced persons (IDPs). Innumerable small events which could otherwise inflame tensions or provoke violence are also moderated and ‘de-escalated’ by the mission using a hotline between Georgian, South Ossetian, Abkhaz, and Russian security actors to defuse possible conflict triggers as diverse as stray herds of cattle, blocked economic, social, and educational connections, and criminal activity spanning what South Ossetia, Abkhazia, and Russia consider an international border, and the rest of the world does not. It is perhaps the definition of traditional peacekeeping, balancing international political rivalries and disagreements with their everyday manifestations among normal people attempting to simply live their lives in a safe and secure environment.

My role in all of this is based in the Mission HQ in Tbilisi, helping to monitor and oversee mission activities, plans, and strategies from a weekly operational level to a longer term strategic planning perspective spanning months or years. For the mission planners, political analysts, and subject matter experts, this involves looking at the big picture, beyond everyday tasks to dynamics across the region and the post-Soviet world, with an eye toward the goals and strategies elaborated by the EU Global Strategy (EUGS) produced in 2016. The EUGS links the security of EU member states to the stability and resilience of their neighbours, including those in the Eastern Partnership seeking a closer relationship with the EU and western political and security institutions. However, the events in Ukraine in 2014 underlined the fact that this approach is viewed with hostility by Russia, which continues to regard former Soviet states as within its sphere of influence and responds defensively whenever its neighbours contradict this belief. Notably, Russia never withdrew its troops in compliance with the Six-Point Agreement, and has only strengthened its military presence in the breakaway provinces, contributing to further insecurity and vulnerability for Tbilisi. Georgia’s current participation in the international ‘Noble Partner’ military exercise together with American and other international troops is one in the latest series of large exercises held by both sides in the region, a game of military posturing and mutual distrust reminiscent of the Cold War. Indeed, the visit of U.S Vice President Mike Pence to Georgia on 2-3 August was quickly followed by a visit of Russian President Putin to the breakaway province of Abkhazia a week later, underscoring the increasing tensions playing out both here and on a global scale.

Judging by our current uncertain international environment, the task of providing stability, consistency, and visibility to vulnerable settings appears more important than ever, and the steady task of monitoring, analysing, and reporting would seem to be a task that EUMM will need to carry out for some years to come. So, day in and day out, the EU patrols will set out across Georgia, no doubt hoping for the temperature to cool.

Andreas Berg has worked for FBA in several capacities since 2010, including as Political Adviser, Security Sector Reform Advisor, Strategic Planner, and Coordination & Cooperation Officer, in locations including Kosovo, Georgia, Brussels, and Ukraine. From 2022 he is working as Security Sector Reform Specialist for FBA, based in Stockholm and focusing on the Western Balkans.

There and back again – the unexpected journeys of year COVID

What is the last ‘normal’ thing you remember doing? In the extreme year of 2020, many of us have asked this question, trying to remember the last event or activity where we blissfully, innocently, spent time in public spaces without caution, moving through crowds, kissing cheeks, and sharing food in a way that now feels […]

‘May you live in interesting times – in Ukraine’

Almost six months ago I wrote about the prospects for reform in Ukraine following the decisive election of a new president and parliament, driven by the desire of the voting public for major reform and stabilization of a country still involved in an ongoing conflict. Since then, the new government has frequently been tested by […]